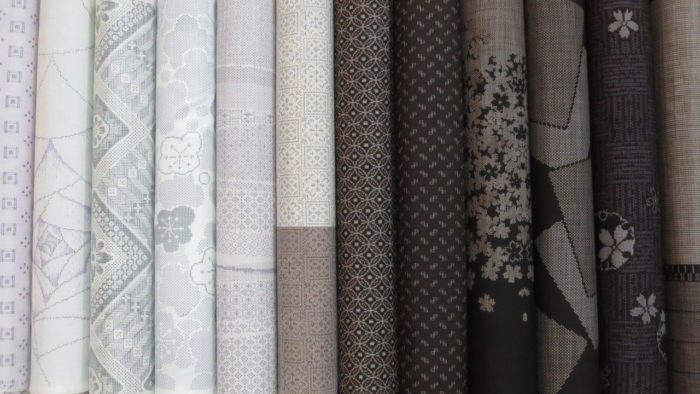 Oshima tsumugi is the most famous ‘tsumugi’ kimono, with its finest kasuri (ikat) and wide choice of design variations. Even though Oshima tsumugi is the biggest tsumugi weaving area and industry in Japan, the production rate is decreasing hugely, due to the decreased demand of kimono and the lack of successors. In next 10 years, the situation is expected to be worse.

Among them, Amami area continues to manufacture in an traditional manner, producing mud-dyeing and handwoven Oshima tsumugi (Kagoshima area largely uses power loom and they can not do mud-dying). Amami area’s change in producing volume is proportional to all other tsumugi weaving areas, looking at it will give us a prospect of tsumugi traditions. 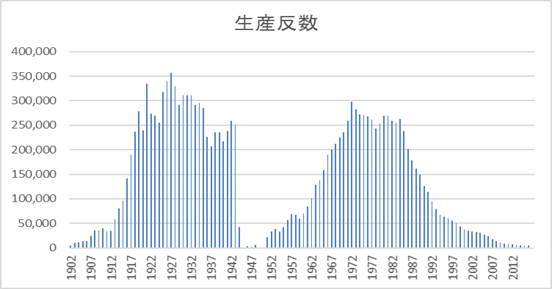 At the time when ‘Authentic Amami Oshima Tsumugi Cooperative Association’ is established in 1902, it was about 5,000, and in 1927 it reaches to 356,094 which is the best record. In 1945 when WWⅡ was over the production it is stopped completely, but recovered gradually and rode on the boom, which finally reaches to 297,628 in 1972 as the peak after the war. The kimono market was also at the peak at the same year. 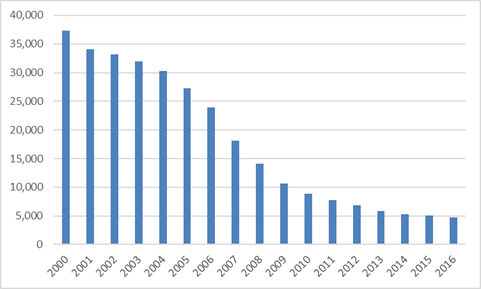 The production variation after 2000

This is lower than the number from 1905 when the statistic started. Compared with the peak after the war, shrank to 1.6%. Incidentally, the kimono market today is one-tenth compared to the peak, so that the Oshimatsumugi’ production rate is far beyond to be decreasing. At the heyday in Amami Oshima island, manufacturing of Oshimatsumugi was the biggest income source for locals and the large part of the population was involved in in someway of the production. So, the impact on island’s economy was also huge.

Below is the future prospect chart, assuming the progressive reduction of 12% annually. 2o years later, it will reach to 300 in 2037. Even if we take a wishful thinking of 6% decreasing annually, it will become below 1300.

All of traditional craft weaving regions in Japan now are endangered due to lack of successors. Even so Oshima tsumugi is still biggest tsumugi production region in Japan today. Yuki tsumugi is produced about 1200, and Kihachijo is about 300. Echigo-jofu and Miyako-jofu are manufactured only 20 each (based on the date from 2016).  Compared with those areas, Oshima tsumugi is still outclassing.

However, without exception all the craftspeople involved in manufacturing Oshima tsumugi are severely aging. Nearly 90% of them such as weaver, dyer, kasuri maker, design or processing artisans, are over 60 years old. Oshima tsumugi is made by the production network based on the division of labour. So the most frightening problem is that if the key person who is responsible on one of the processes will suddenly stop all the processes. The division of labour had been important for the productive efficiency, however now it is the point we need to consider. 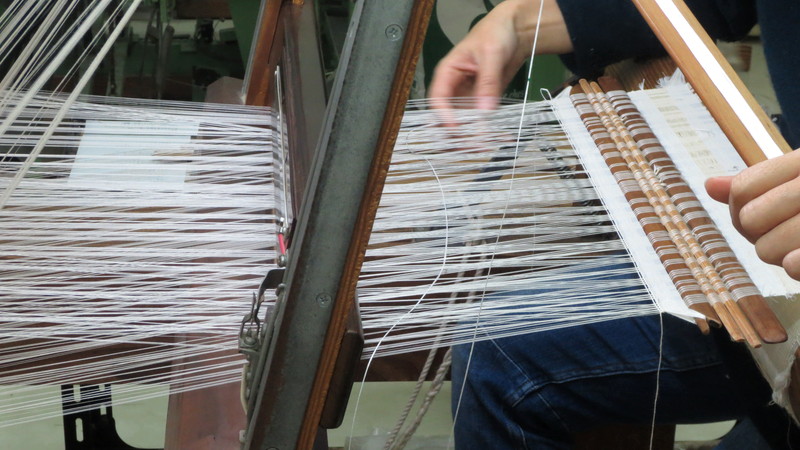 Famous ‘Shimebata’, to make ikat through weaving. This is the bottleneck now and the prime task to have the successors. 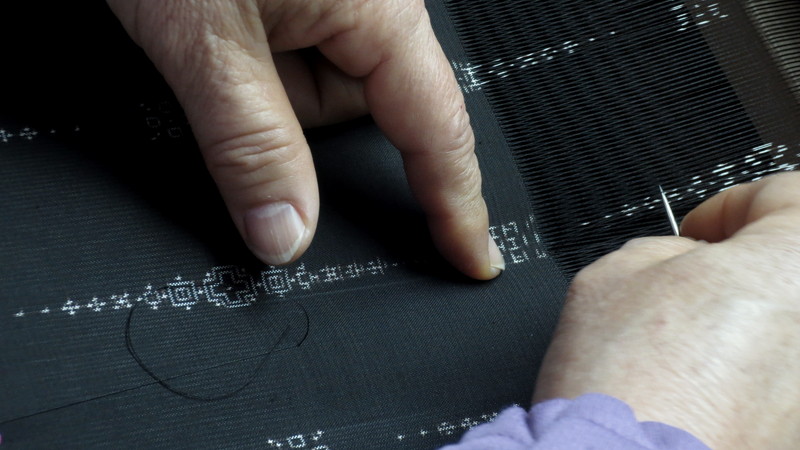 Kasuri ikat pattern on hand loom. Weaver need to adjust one by one by a needle

The lack of successors is the high priority issue. Certainly in next 10 or 20 years, we will face difficulty on the production. Although we could not look forward a bright future, the glory of Oshima tsumugi’s finest ikat in the history of mankind are not going to sway, and we can still get the highest quality weaving. Now it is the time when