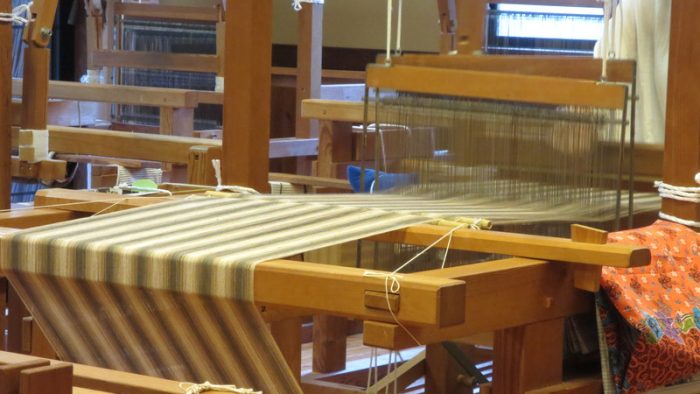 Various Japanese kimono fabrics are said to be “hand-woven” textiles.

Hand-woven fabric reminds you of the image that it’s all done by hand where an weaver sits on old-fashioned handloom, throwing a shuttle right and left with a reed beating up the weft yarns one by one. However, that would not be the case to all of “hand-woven” fabrics, because there are various weaving looms exist today and some of them are difficult to be regarded as hand-weaving, although it says it is “hand-woven”. 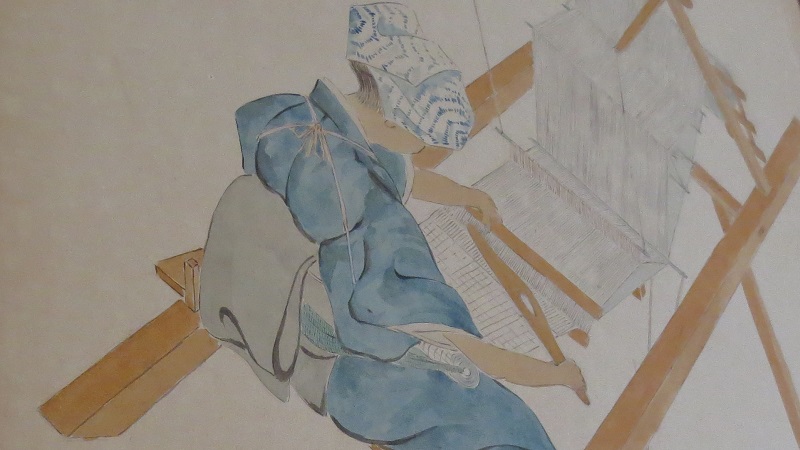 The term, “Hand-woven” is in fact vague and misunderstood well. I would like to look at different types of weaving looms and examine to what extent it is hand-woven.

I would like to first introduce the different types of looms that have been used in Japan.

The most conventional handloom used in Japan is a type of floor loom called Takabata “高機”. Takabata floor loom is appeared in the late Edo period (late 19th century) and the shape are almost unchanged from then. The smallest one can be set on a tatami. In old time, many females in farmer household used to weave with a Takabata floor loom as a side work and there are many old disassembled Taka-bata in an storehouse of traditional household. The structure is very simple as well as robust, so that many of Taka-bata being used now are more than 100 years old. The basic structure is same with ordinary floor loom used in many other countries. 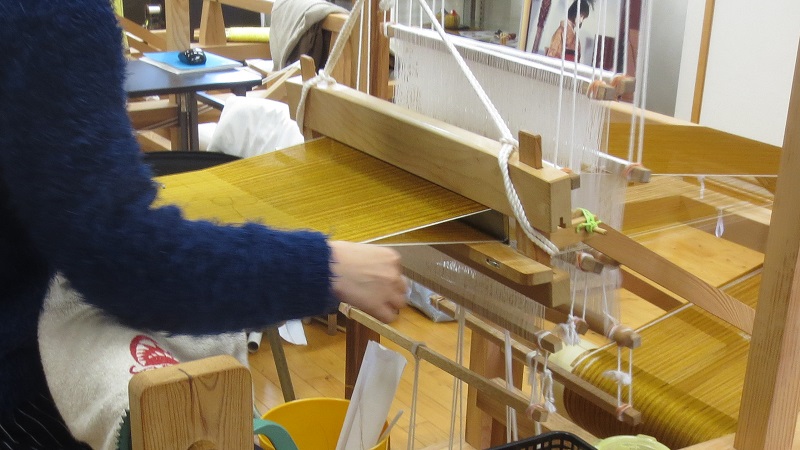 Takabata, weaving one of the highest class tsumugi, Kihachi-jo silk.

Before Takabata appeared, a back-strap loom, called Jibata “地機” had been used from ancient time of Japan. The warp yarns are directly strapped on weaver’s back, so that the tension of the warp yarns can be adjustable. It is more like “body-weaving”, not just hand weaving, because weaver’s body is a crucial part of loom’s mechanism, moving whole body in order to weave. Jibata requires enormous effort and seasoned technique. Therefore, it had been replaced by Takabata which is far more easy to weave. Today, Jibata is used in very limited traditional weaving areas, such as Yuki tsumugi and Echigo-jofu. 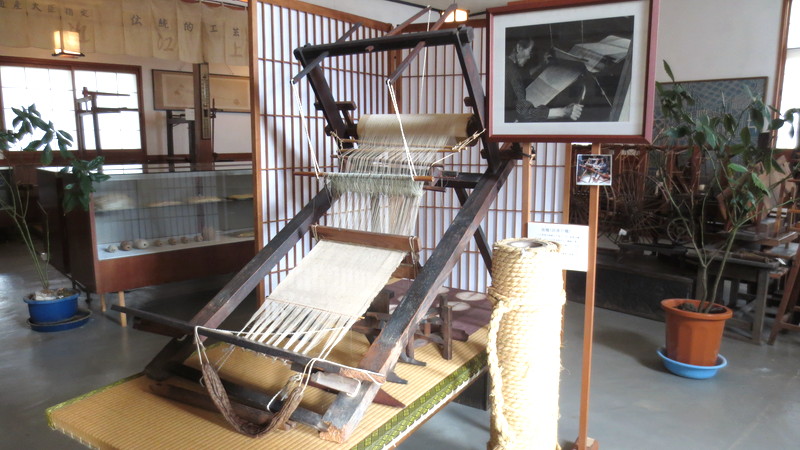 Jibata, that had been used for Omi-jofu. The shapes are slightly different in different regions of Japan.

Takabata could increase production efficiency by three times as much as Jibata, thanks to which the warp yarns are fastened and fixed on Takabata. On Takabata weaver just need to rhythmically pass back and forth shuttle, while operating treadles. Takabata also made the multi heddles possible for developing various complicated weaving. Various twill weavings or raised weaving patterns have been produced rapidly since the Meji era (beginning of 20th century ~). 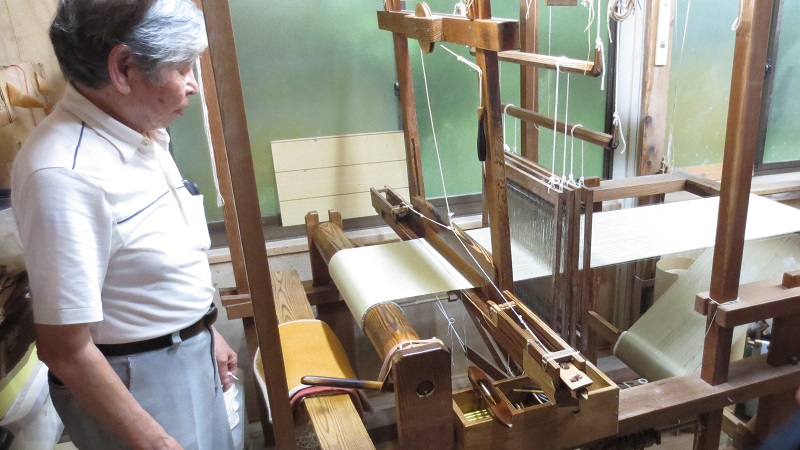 Batten, used by Morihiro Kikuchi.  Pulling down the string at the center can pass the shuttle right and left. Weaver can concentrate on the operation of reed and treadle.

Batten was a more efficient type of Takabata. But, the emergence of foot loom could increase more efficiency, which atomizes the pushing operation of reed.

Foot loom achieved at atomizing 3 operations at one time of stepping on treadle; 1. moving sheds to open up upper and lower warps, 2. in the meanwhile, throwing shuttle for passing the weft yarns, and 3. pushing reed to weft yarns into place. 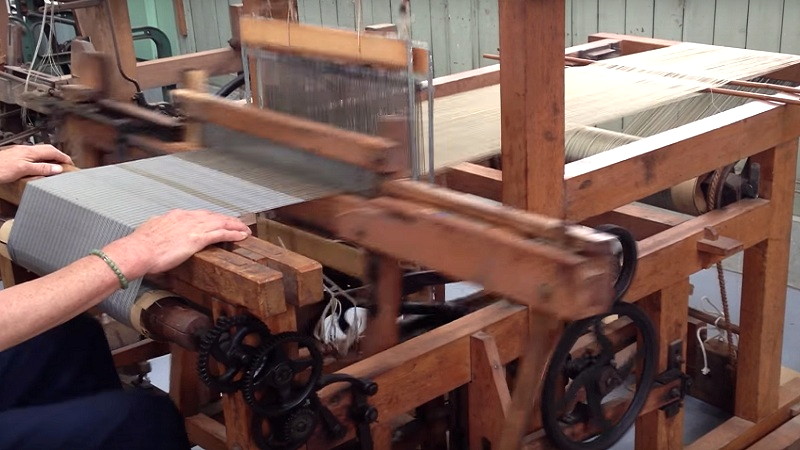 Foot loom just need weavers’ foot stepping operation and hands are free, which seems to be far from “hand-weaving” process.

Finally, power loom has been developed, atomizing all the humane operation including the foot stepping operation. 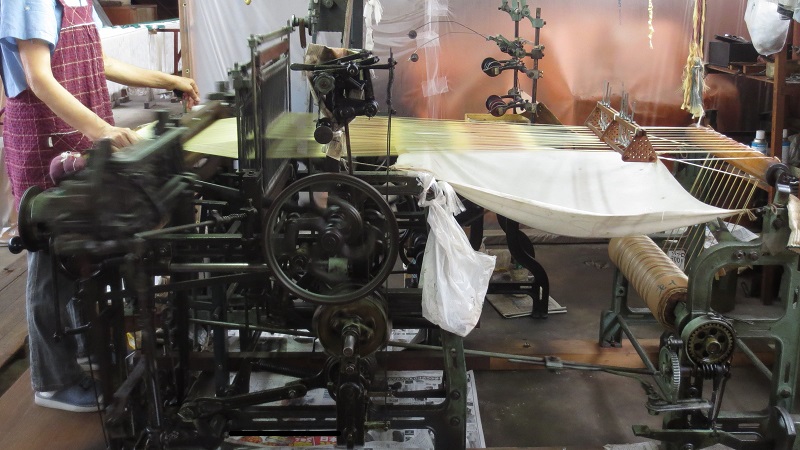 Power loom, all of the structure consist of metallic material, not by woods. Can be seen as “machine”. 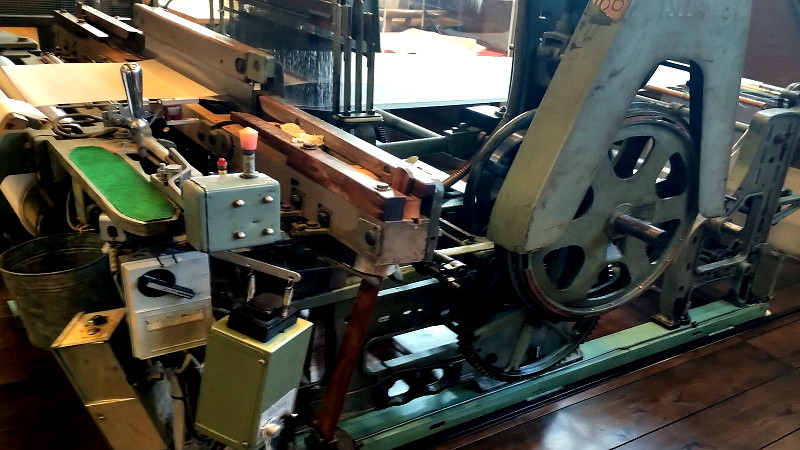 Another type of power loom, there is a lever to switch on.

Power loom is run by electric power, and weaving speed is very fast. If it is the case of full-automatic type of power loom that run all the time when the switch if on, an operator can take care of multiple looms. The rotation speed of the crank shaft adjust the weaving speed, and for example, 200 rotation per minute can beat up 200 weft yarns per minute. It can weave over 5cm by 1 minute and 5 hours is enough for finishing a bolt (12.5m)

Jibata takes more than a month for a bolt, but power loom is able to produce many bolts in a day. This was the history of the productive efficiency in order to produce cheaper fabrics as many as possible. Today, rapier loom or air jet loom that do not need shuttle are emerged, which are able to weave optional patterns with wider width at the high speed. 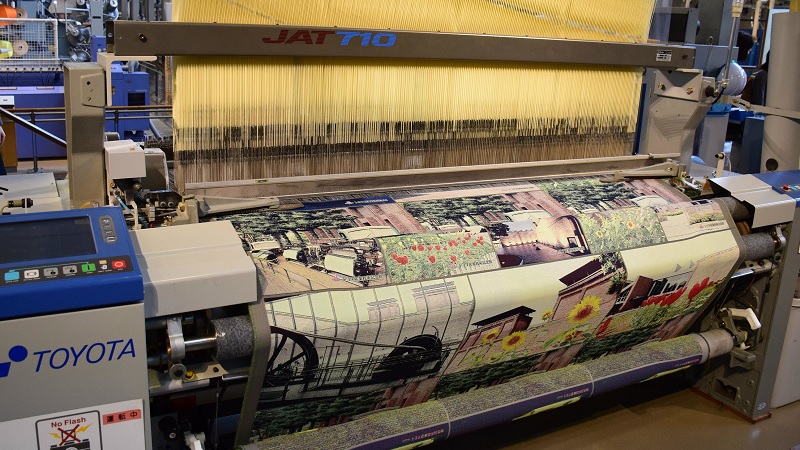 We have seen the development of the weaving loom; Jibata→Takabata→Batten→Foot loom→Power loom. It appeared that our imaginational “hand-weaving” would be acceptable before Batten and it may not after foot loom.  So please be careful that if it is woven by foot loom or even power loom, there is a case that it says hand-woven fabrics.